Upstate New York resident Erin Tobin just had her best day ever. She achieved instant fame when she banked in a half-court shot at a Siena College men's basketball game on Thursday night, not only earning a $500 Dunkin' Donuts gift card, but also a surprise marriage proposal from her boyfriend disguised as a larger-than-life coffee cup named "Cuppy."

Duckett would pose as the Dunkin' Donut mascot while Tobin, a 2008 Siena graduate, would get an opportunity to hit a half-court shot. After the shot, Duckett would strip off the mascot costume and propose to her in front of 5,500 fans. All this would have to happen quickly, because the events were set to take place during a timeout, not during halftime.

On Thursday, Duckett and the PR staff put their plan in motion. The only thing they didn't expect was that Tobin — a former high school basketball player — would make the shot.

The Albany Times Union reported that in the days leading up to the halt-court attempt, Tobin was allowed to visit the Times Union Center to take a few practice shots. Apparently, one barely reached the end line and another was wide by a mile. Tobin's brother joked that he pay her $50 if she could even hit the rim during the game.

In a 32-second YouTube video that has been viewed more than 250,000 times — including high-profile appearances on Good Morning America and ESPN's SportsCenter — Tobin is wearing a golden Siena Saints T-shirt as she stands at center court, takes one stride and launches a right-handed fling. The ball takes a high arc, banks off the backboard and then right through the net. The school's announcer can be heard exclaiming, "It is up. It is good, good."

Duckett told the Times Union that the visibility within the mascot outfit was very limited. When Tobin, 30, hit the shot, she the threw up her arms and danced out of his view.

"I couldn't see her!" Duckett said. "She makes the shot, and then for me, she disappears. I can't see out the sides of Cuppie. I didn't know where she went." 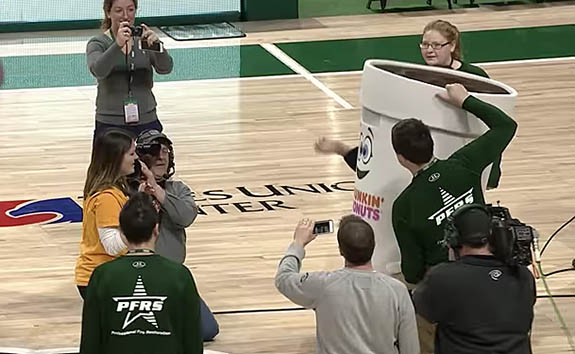 The Siena College PR staff was able to guide the excited girlfriend back to center court, where Duckett — still disguised as Cuppie — was already down on one knee. A moment later, the costume was lifted to reveal Duckett with a ring box in his hand.

He quickly popped the question (this is all taking place during a timeout of a live game) and Tobin said "Yes."

"I was jumping up and down after hitting the shot since my brother said he'd give me $50 if I even hit the rim," Tobin told the Albany Times Union. "And then I turn around expecting a gift card from Dunkin’ Donuts and there he was on his knees and I didn't have any words."

The announcer summed it up for the fans: "The cup of coffee was so excited, he wants to marry that girl that just knocked down a half-court shot."

It was a great night overall for the couple and their favorite team, as Siena College defeated Manhattan 94-71.

Check out the awesome video, below.